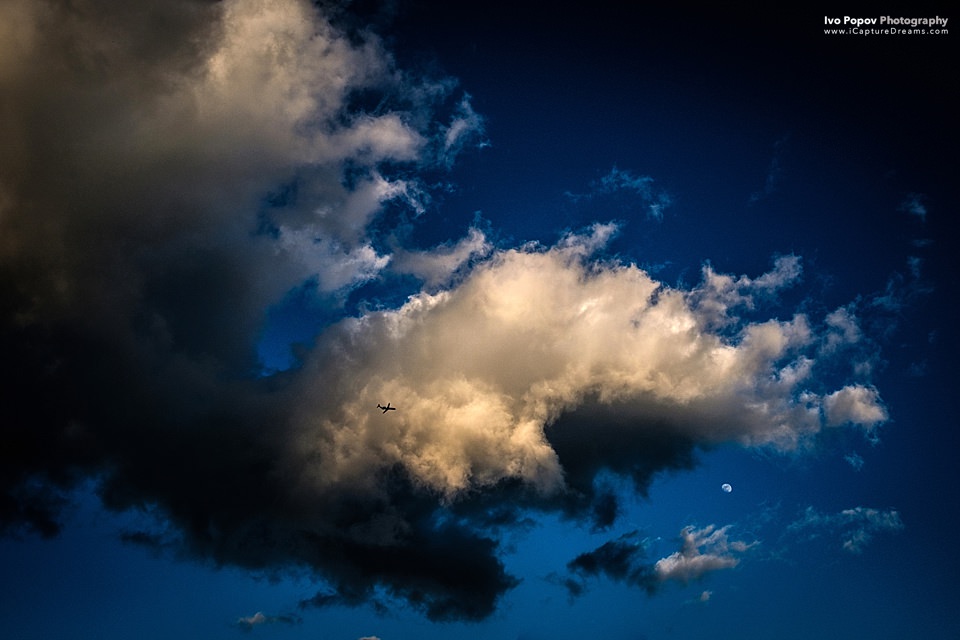 I took this photo a few days ago, showed it to a friend and his first reaction was: “Wow, talk about being at the right place at the right time”.

I was a bit annoyed at first, but decided not to say anything and smiled at his remark. He clearly liked the photo, and his innocent reaction was actually kind of a compliment in his own way.

But why did it bother me? What seems like a lucky coincidence was actually a carefully planned photo.

So, how did it happen? I planned to take some photos that day around sunset since the weather seemed quite nice. The previous few days it was quite rainy and the sky was still full with this nice and kinda dark clouds. The light of the setting sun was painting them in crazy colours and I thought it might be nice to get a few shots of the sky. The Moon was already visible, so I decided to try to frame her with the clouds. I took quite a few images but nothing seemed interesting enough.

I live not too far away from the airport and the planes cross the sky quite often and sometimes quite low. Every few minutes or so a plane was crossing my line of view and I thought it might be very cool if I managed to get the Moon framed nicely and the plane crossing at the same time. Luckily the clouds were moving slowly, so I just had to wait and hope another plane will cross before the clouds move away. It took a few more minutes to get the shot I wanted.

So, in a way it might seem that I was being at the right place at the right time, but in reality it was a carefully thought and planned photo that took time and effort to produce.

My point is this: don’t really expect good photos to just happen around you. Yes, it is possible, but most of the time you will be considerably luckier to get home with better photos, if you plan carefully, observe your surroundings and work towards a goal. When you see something nice and decide to take a photo, don’t get satisfied with just taking a shot or two and walking away. Try to work the scene – stop, look around, change the angle, try different focal lengths, just experiment a bit.